RUIN – An animated short set in a post-apocalyptic universe

Wes Ball from OddBall Animation has completed the RUIN project, a stereo short he has been working on for six months. A graduate of Florida State film school, Ball has had a solid background of live action. In fact, his final year thesis film ended up being his first animated film, in fact the school’s first animated film project.

Wes Ball went straight into working for himself after he left film school and had been using NewTek LightWave, and Luxology’s modo ever since. CGSociety spoke with him from his home in Los Angeles. “I want to be making movies,” he fires off.

“I decided to make my own movie, like it was a real job. Devote myself to it. Count it as an investment.”

Three months were spent building assets for each of the sequences in the film. Roads, including all the surfaces. He created a replica of the Universal building in Los Angeles to house the opening sequence down the side. Trees, bushes, and the jungle of ivy that hangs off the walls of the roads. He’d save off different mattes for doing color correction tweeks, but essentially it was all done in-camera. Ball says he had been thinking about this story for a long time, approached a lot of the setups like it was a live action shoot, then exception being he would have to create everything he wanted in the shot. 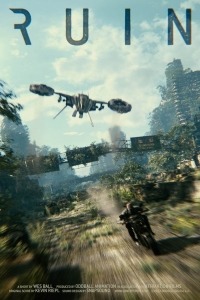 Wes Ball has been playing around with using Recoil as a modeling tool to create quick complex building ruins. He talks about how he would just go ahead and make a few simple objects, then run the Recoil simulator, and things fall where they want to. He immediately copies those poly’s and pastes into a new mesh layer, set that new mesh to a passive collision object, then run the simulator again. “After a few iterations, you get a pretty nice pile of rubble,” says Ball. “My one pile is about 200,000 polys, which is really mean’t for distant objects although it holds up fairly well at a medium distance. Replicating this object over a landscape and it’s looking pretty nice. Almost all of the complexity of this film is done using replicators.”

He created the hundreds of trees in a small app on the iPad called TreePath that lets you draw trees, then export in FBX format, and then bring it into modo. He created the leaves in replicators, froze the replicators and put them together and created the trees. He even had the trees blow around in the exhaust of the craft that was hunting the hero. Ball talks about the happy accident of placing the ivy on the wall. He set it to continue placing and now it really looks like it is overgrown. Perfect.

“There is one modo file per shot,” explains Ball. “Then the character is rigged up in LightWave. The whole thing was also animated in LightWave.” When he says that the majority of the shots are created on the fly and in-camera, there is one exception in the tunnel where the lighting is created using an optical flare in After Effects, using depthmaps to control where the cutoff is in the illumination.

In the chase through the roads in the film, Ball had a live-action style to capture that motion. He created the road in the shot then made a line which would have bumps, up and down, left and right. Then he’d set up the null (which would be his camera truck). He would set up the bike out front as an asset, run the asset along the line in LightWave collecting keyframes along the way. “This is a poor man’s motion capture,” he laughs.

Wes readily admits as an effects guy, he is a frustrated film maker. The best lesson he has learned from making the film was that it is not about the shot; it’s about the sequence. “We effects guys work in the world of frames, and you just can’t do that when you’re making a short like this. You’ve got to find the shortcuts and you take them.”

Wes Ball goes through his workflow during the production of his short film, RUIN. He talked about challenges & surprises during his production.