The Head of Earth’s Defense Council glared at the witness before him, his brows forming twin spires at the peak of their formidable arch. “I’m not sure I understand the purpose of this meeting. Nor I am certain that you have the authority to call it.”

On the stand, the compact, muscular figure calmly faced the bureaucrat. He sat straight upright in the simple wooden chair, his posture bearing witness to his military training. The days of hero-worship since his return had made no dent in the cool, self-possessed confidence that seemed to emanate from him like light from a candle.

And the public were moths that flocked to that light, the Head of EDC knew. That was why he was at this meeting. Bother or no, lack of authority or not, if this man called him to a meeting, then he attended. Period. He was beholden to him. The entire Earth was beholden to him.

Reading his mind, it seemed, the man spoke. “I hope I haven’t inconvenienced you, sir,” he began politely, “And I thank you for your attention.”

“Nonsense, we owe you a great deal of gratitude, Mr.-”

“-Mr – ah – Skippy. I just hope that you have recovered from your ordeal, and-”

“I shall never recover from my ordeal. But I am here to clarify. When we went through the slipgates…” The audience, both in the room and on the net, leaned forward. This man had saved Earth, yes. But the cost had been dear. No one else had survived the mission, and he had grimly refused to provide any details beyond the tight-lipped phrase, ‘Shub-Niggurath is destroyed.’ He continued speaking, a slight twitch appearing in his jaw, “When we went through the slipgates we were nearly overwhelmed. One thought kept us—kept me—going. To lock the dimensions, to close the door, to destroy the slipgates. And we kept our purpose, we adhered to our will: we proceeded from slipgate to slipgate, encountering ever-increasing horrors even as we ourselves dwindled. Scrabbling for ammunition and sustenance; looting the bodies of our brethren in order to fend off the next nightmare wave. And the next, and the next. And to keep going, keep destroying the slipgates. Even if it meant shutting out our only hope of going home. And we thought that it did.”

The crowd sat balanced on the edge of their seats: a human avalanche waiting to happen. The man’s eyes were almost sparking with intensity. The Head of EDC stared at him, rapt. What this man had been through was inconceivable. And yet he had made it back; had saved Earth.

“By the end I was the last one left. The minions of Quake hurled their worst at me in that final horrible grotto. I was fighting with ax and shell…I can still see the purple Vore-spheres tracking me backward through the darkness…” His eyes were now fixed on unmoving space, seeing something that none of them had seen, that none wanted to see. Not a breath was taken, not an eye blinked as they watched him struggle with himself.

He regained his former composure. “After laying waste to the Guardians of that pit, Shub-Niggureth lay before me, defenseless: a giant useless slug. A mother termite that had to be stepped on. And I did. Her great body fell in tatters around me, spattering me with gobbets of rancid flesh. I had reached the end of the line. There was no retreat to be made, no advance that was possible. I considered hurling myself into the lava so as to quicken the inevitable end.”

He looked up at the Head of EDC. “That’s when I met him.”

Bushy brows cocked back in alarm. “Met who?”

“Quake. He came to me there, in my defeat, in my despair. I knew I was no match for him. Shub-Niggurath was as a dog to him, and I barely survived her onslaught. When I saw the last, glistening slipgate teleport in beside me, and heard the rumbling voice of Quake I thought that Earth was doomed.”

“Quake is…it’s difficult to say…Quake is a condition that a certain part of the multiverse has fallen into. Quake is that it is…”

“What did this…what did it want?”

“Quake talked to me…soothingly. But all the while I tried desperately to formulate an escape. Something, anything. I knew I had to go through the slipgate, somehow. But I didn’t want to leave it there. So while Quake talked, trying to persuade me and win me over, I conceived of a way to use my few remaining cells to keep the slipgate open while I pulled it through itself.”

“Yes, sir. I present you with…the Last Slipgate.” At this, a curtain fell from around a bulky object in the corner of the room. People gasped as they regarded the alien metallic grid, the smell of brimstone seeming to ooze from it. And no one could ignore the brick-red spatters that testified as to what kind of place it had come from.

“So you truly did succeed. The last slipgate is in our hands. We are safe.” The soldier smiled, the first smile anyone recalled ever seeing on his face. The Head of EDC stood and offered his hand to the man. “Sir, I cannot tell you what kind of service you have rendered. The Earth is yours to command. We are in your debt.”

The Head of EDC stood looking at the slipgate. “What was he trying to persuade you to do?”

The soldier looked up, suddenly alert. “Excuse me?”

“Quake. When you were figuring out how to return with the slipgate, what was he trying to persuade you to do? You said he was being persuasive.” 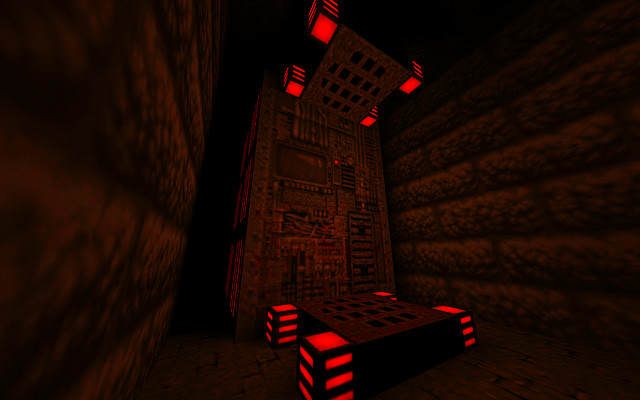 “He was trying to convince me to betray you. To betray the Earth.”

The Head of EDC walked around the slipgate, noting that it was warm to the touch. “Whatever made him think you would do that?”

A pink thing, all fangs and fury, flew out of the slipgate. Another followed it. White ghostlike creatures shot out into the air, piercing the room with lances of green death. The crowd screamed–the avalanche released–as the smell of copper filled the air.

Skippy smiled again. “I guess you’ll have to ask him yourself.”