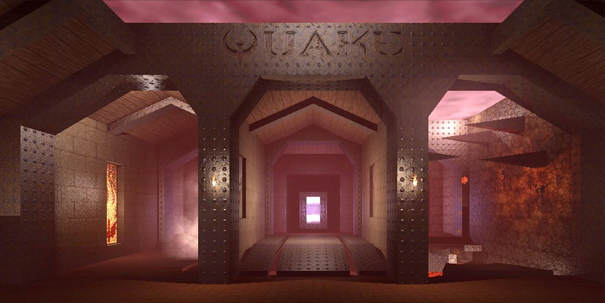 Lewis Denby did a great job writing a Quake retrospective.

“It’s a 16-year-old shooter, yet I remember it as if it were just last week. I remember the pre-release buzz. Here was id Software’s follow-up to Doom, a spiritual successor that rendered the entire world and all its contents in an astonishing three dimensions. I remember the demo, a stunning three-hour chunk of the game that no modern publisher would consider giving away for free. I remember the rumours of what would follow in the full product. Was there really a level that took place almost entirely underwater? Would there honestly be a lightning gun that electrocuted you if you fired it in liquid? Was it true that those collectible runes unlocked a secret fifth segment, accessible from the episode selection room? Did the full game really devour an unprecedented 64 megabytes of hard drive space?”

It’s what we’ve all been through a long time ago, and some of us are still experiencing today. A great game, great atmosphere, and inspiring architecture. I, for one, will never rid my mind of the Quake halls and corridors.

“What else? Oh, so, so much. The boss fights, for one. Quake knew not to have its bosses just hammer you for five minutes in a sort of horrendous, fist-eating difficulty spike. No, Quake had you use your wits. When the fiery Chthon arose in E1M7, launching rockets into his molten chest did nothing. Solving an electricity-based puzzle on the walkways above was your road to success. And what about Shub-Niggurath? A big, dopey, seemingly docile tentacle beast in the middle of a pool of lava, she initially seemed like a rather uninspiring way to end the game. Except, how did you kill her? Bullets, again, did nothing. But what was that floating spike ball that occasionally passed through her belly? And what happened if you jumped in that teleporter at exactly the right moment?

And Wind Tunnels. Oh, man, Wind Tunnels. A sprawling, epic level of interconnecting areas, with enormous tubes that sucked you up and hurled you majestically into the next room. And what about the secret low-gravity mission? And all the other secret bits, for that matter. There’s just so much. So many glorious memories.”