Welcome to CocoT’s 2011 QExpo Booth. My plan for this QExpo is to present you with the following:
– A new mod : INCAS vs PHARAOHS
– A new map for TRANSLOQUAKE
– An update to ULTIMATE QUAD CAPTURE
– A SPEEDMODDING EVENT and a MAPPING COMPETITION

QExpo11 is getting near to its (official) close – unless, as has been implied, it gets extended by a few days under the pressure of its participants. One thing is sure, my week-end is going to be extremely packed with real life stuff, so I don’t think I’ll be able to release my update to UQC on time. No biggie – I’ll post news of it on Inside3D when the time comes. The update consists of 4 new game modes (“Nodes Onslaught“, “Counter Quad“, “Reverse Quad” and “Poisoned Gift“) – but by now I’m pretty sure 99.9% of you guys are uber-tired of this mod anyway…

In other news, I’d be rather surprised if I get any entry at the first part of the Incas vs Pharaohs mapping competition. That’s kind of too bad (this would have been an easy way to win a pretty cool game), but not entirely surprising given the relatively low number of mappers involved in this QExpo compared to former ones. The second part of the competition (with the extended deadline) is of course still running. Who knows…

I was surprisingly more active at this QExpo than I thought I would be, and I am glad I actually got to release some stuff. Feedback about Incas vs Pharaohs has been, on the whole, positive, even though limited to just a handful of people. I’m still quite happy with the mod (I have fun playing it, which I guess is the most important thing) and I’m hoping to release one or two other maps in a not-too-distant, but not-that-close-either future.

While I’m not as “visible” on the forums as I used to be, I want to let you know that coding is definitely still one of my hobbies and that I’m hoping to still release my modest mods in the years to come. Enjoy the rest of QExpo! Thanks to the people who helped setting it up (and, in particular, of course, Chip). Thanks to the people who participated in it! And thanks to my wife for bearing with my late coding/mapping evenings! :-)

That’s it, guys, the speedmodding event of QExpo11 is officially over (I’m not 100% sure nobody else will host one, but I’d be a little surprised if that happens). Remember, if you do have a contribution to this event, either send it to me via IRC or post links to it on this Inside3D thread. Talking about contribution, here below is a little video of my own speedmod. At first, I was a bit reluctant to build one (being the host, having picked the themes and all, it felt a little awkward) but I eventually changed my mind (the more, the merrier, right?) and, yes, I promise, this was done within the allotted time and I hadn’t thought about it beforehand. I’ll bundle all entries tomorrow (to give some extra chance to late comers or people who haven’t been able to get hold of me) and post a download link on the event page. Have a good night, everyone!

Today I’m releasing a new map for you guys to play on my mod Transloquake (demo3). If you are unfamiliar with Transloquake, make sure to try it! The mod is basically all about translocation skills. You can find more info about it on my (old) webpage. I hope you  enjoy it!

Just for your information, be aware that this year’s speedmodding event has been announced! I’m not sure whether or not there will be more than one (there might) but, in any case, this is the one I’ll be hosting. I hope to see a lot of you there! :)

In other news, make sure to grab your copy of Incas vs Pharaohs released yesterday. It even got a mention on yesterday’s Tastypleen coverage of QExpo! I couldn’t help but giggle at the (relative) cluessness of the hosts as to who I was (guys, since it is, after all, QExpo, you might want to check this forum thread and maybe even my site) and who, for some odd reasons, thought I am somehow involved with Darkplaces. It was good fun, though, and I don’t blame them – I’d be totally unable to come up with one single name of a modder for any of the other Quake games. The show was fun to listen to, so make sure to tune in their site for more coverage tonight!

Today sees the official release of my mod INCAS vs PHARAOHS! You can download it from Quaketastic by clicking here. In this mod, you battle against your enemy by gradually destroying the platforms on his/her side of the level while using of a few “artefacts,” power-ups that spice up the game. If you want to know more about the mod and how it is played, check the readme, downloadble here. Enjoy!

This release also means the official launch of the INCAS vs PHARAOHS competion. More info on this event and its prizes is available at this event booth. 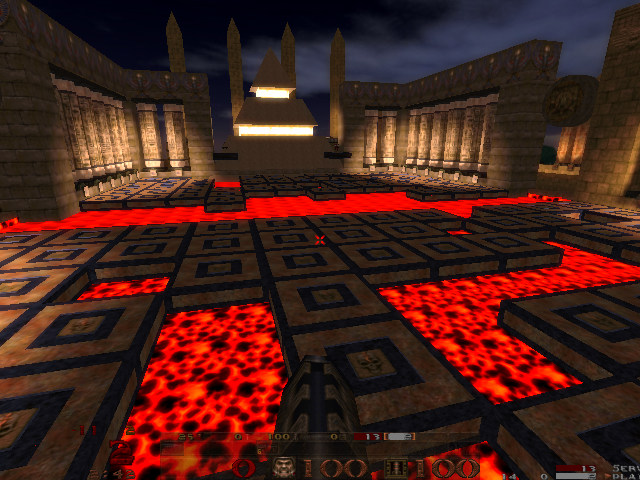 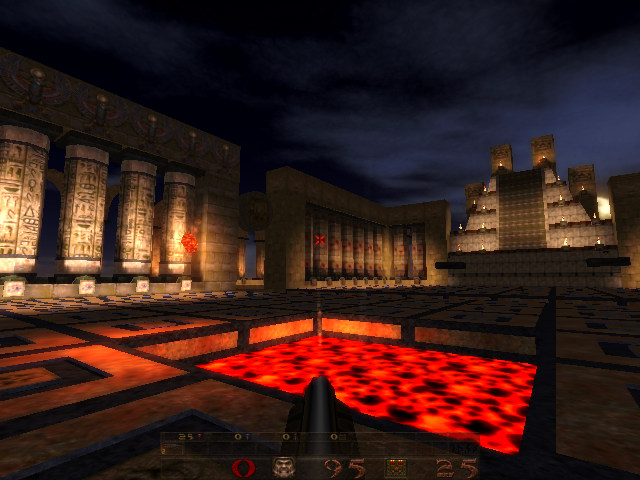 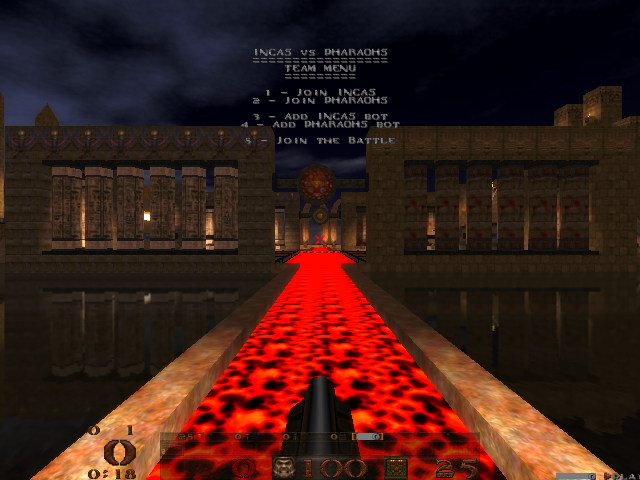 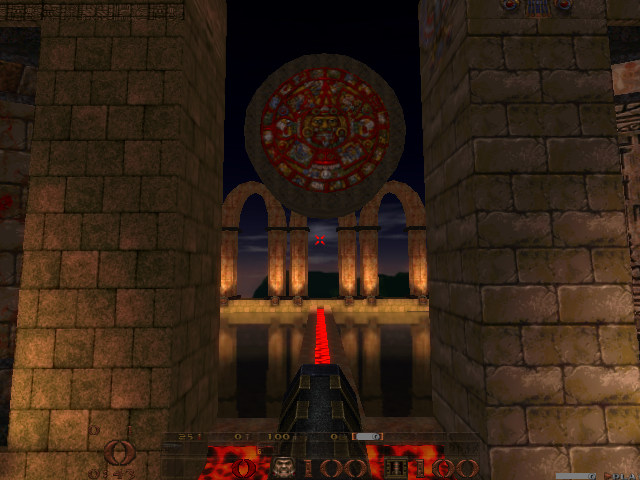 Wait, wait, what, what? QExpo started a little earlier than scheduled! :)

Well, Incas vs Pharaohs is almost ready. Since this is Fathers’ day today, I might spent some time with my sweet baby boy before giving it the final touches, but until then, here is a little video that will give you a sense of how the mod is played (note: some models and fixes have been introduced since this video was taken)

Only one day before QExpo starts! (and this booth will become officially open)

Here below, the mod’s new menu background.The last few days have been spent on a rather deep code and map overhaul of Incas vs Pharaohs. The mod is looking good and now fully playable with bots. In all likelihood, the mod will be bundled with only one map, as I don’t think I’ll have time to finish a second map. As you will see, this single map is a good-looking one, though. Hopefully, the mapping competition launched with the mod will see the release of some additional playgrounds! :) 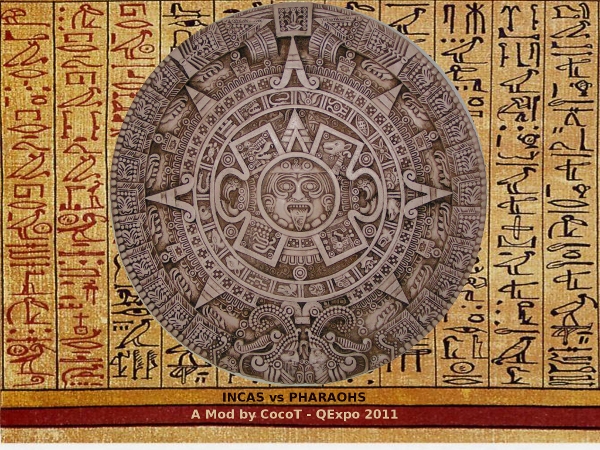 Free time this week will be devoted to giving the finishing touches to my first (and main) map of my new mod, Incas vs Pharaohs. There might be a second map bundled with the first release of the mod, but I’m not sure right now. Here below is a screen capture of the first map in Worldcraft (click to enlarge (that’s what she said)). 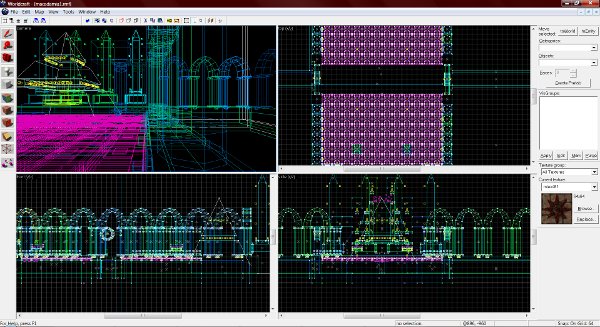 My booth is up and running. I’m not quite sure how much I’ll work on its design in the next 8 days (I’d rather work on the material to be released instead) – so forgive me in advance for its simplicity!
It’s nice to see a new QExpo being organized – I’ll be frank with you, I was kind of doubting this would happen so quickly – and to see so much excitement about it in the various Quake forums. Hopefully this year will see a large amount of good releases! :)