I threw this mod together over a couple of days around my other random/DNF-related projects, specifically for Quake Expo 2011. It’s called Midgets, and it’s about midgets, and a terrible penis-looking weapon. But it’s not really a penis, I swear. It’s just a fleshy alien stick that can change form and produce midgets. This mod was developed and intended to be played in a plain old software engine like WinQuake, but I’ve also tested that it works well in DarkPlaces. 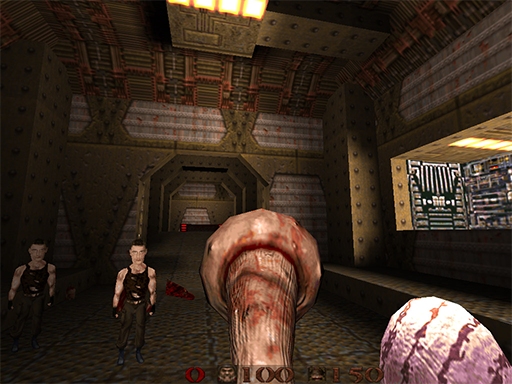 From the included ReadMe:
In this mod, your weapons are all replaced, except for the axe, with a phallus-looking multi-tool. It allows you to create midgets and do other things. Impulse commands:

All ammo is also replaced by Midget Juice. Midget Juice is used for everything relating to your Tool.

Birthing Mode
—
Your Tool creates an egg at the cost of 10 Midget Juice. You must wait for the egg to hatch, and monsters will attack it if they see it. Once the egg hatches, you will have a midget to help you in combat.

Cannon Mode
—
Expends only 3 Midget Juice to creates a crippled midget fetus, which flies through the air and explodes on impact.

Seed Shot Mode
—
Concentrated seedshot bursts at the cost of 2 Midget Juice each.

Insemination Mode
—
Inseminating monsters will deal damage to them periodically, at 5 * the number of seeds planted within them. If a monster dies from insemination, it has a random chance of spawning a midget.

Suction Mode
—
Can be used to swing around like a grappling hook, or pull monsters toward you. Your Tool will begin to devour monsters while you are sucking them in and facing toward them. You can also use the Suction mode to move your midgets around without harming them, which can be useful when they’re stuck or frightened.

Midgets
—
Midgets have extreme ninja powers and can beat the shit out of things. They will follow you around while attacking and eating monsters.

Midgets level up and gain health by feeding on the dead. At the end of each level, your Midget Juice will be replenished for each living midget, by a factor of 6 * the midget’s level. Midgets also deal more damage as they increase in level.

Midgets are only interested in relatively fresh corpses. If a corpse has been sitting long enough to cool off, a midget will naturally have no interest in it.

Midgets are allergic to fluids. Be careful!

If you find yourself in desperate need of Midget Juice, you can use the axe on your midgets to suck some juice out, at the expense of their health. However, be careful, because midgets will only take so much abuse before they explode in kung-fu rage.